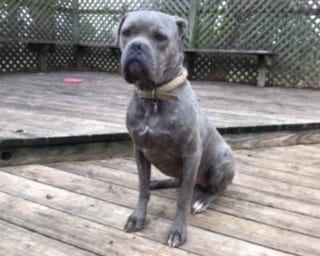 Let’s all welcome Zeus to the program!! This poor boy has already had quite a rough life in his short 2.5 years. Originally purchased from a breeder, Zeus started life with a loving owner. Sadly, his canine brother did not take a liking to him. After increasingly severe fights, and no amount of training helping, the owner decided it would be best to find Zeus a new home. Poor Zeus was never the antagonist to the fights, and was still small and taking the brunt of the damage. Unfortunately, he was sold for breeding to a second owner, who did not have the best intentions for Zeus at heart. A year after being sold the second time, the original owner was contacted by a shelter, who had found Zeus wandering, severely emaciated and heart worm positive. Luckily, the second owner never changed the microchip information. Zeus’s first owner immediately contacted CCR to help as he knew nothing would be better with his current male. He then drove 4 hours 1-way to pick up Zeus to keep him out of danger. WOW! We cannot thank him enough for that! He truly did love Zeus and wanted the best life for him. Now, Zeus has received his heart worm treatment and is looking for a FOREVER family!! Due to his past experiences, he would be best with older children, and as an only pet.